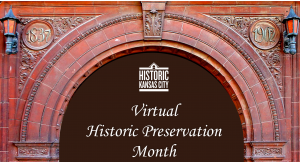 Since the community can’t come to us, we will be going virtual, offering a variety of online content designed to educate and raise awareness about the important role of historic preservation and advocacy in Kansas City. Click HERE for info.

2018 Moveable Feast: A Night Out with Hemingway

On Sunday, September 17th, 2017 we celebrated our exclusive access to the home designed by Bruce Goff, a pioneer in organic architecture. Known as the Nicol House (1964), the home features an octagonal floor plan with a central fire and water feature, as well as a suspended genuine Sputnik satellite. We also played golf croquet around the grounds in teams of four, handing out prizes, and dressing up in our favorite 1960s retro attire.Keep checking our website for our next Golf Event!

On November 11th 2016, we relived the Roaring 20s in Kansas City at Club 1228! Everyone got dolled up and hit the juice joint where the music was hot, the booze was flowing and gambling occured! It was held at the Brass on Baltimore and we announced the “I’m a Preservationist” award winners.