After the Civil War, the Steptoe neighborhood just south of Westport filled up with freed slaves who were allowed to own and rent property in this area. This photo from 1940 shows some of the homes between Summit and Wornall from W. 43rd to W. 44th Streets that made up Steptoe. While all but a handful of homes have now been destroyed, a new group called Steptoe Lives is working on ways to commemorate the neighborhood and its rich history.

Learn more about the history of Steptoe HERE.

Although most of the buildings in Midtown Kansas City’s former African American Steptoe neighborhood have been demolished, a newly-formed coalition of groups has come together to keep its memory alive.

The Steptoe Lives coalition is concerned about Steptoe’s vanishing history on the heels of the recent demolition of several more of its homes. The Steptoe neighborhood centered around 43rd Street Terrace and Pennsylvania Avenue just south of Westport. After the Civil War, it became a unique place in Kansas City where former slaves could live and buy property. A 1925 map of the area show about 80 structures in Steptoe, bounded by Broadway and Summit Street between W. 43rd and W. 44th. In addition to modest family homes, the neighborhood included two churches and the Penn School that served its residents.

The late local historian Joelouis Mattox began the effort to gather the legacy of the neighborhood almost two decades ago, and a documentary including interviews with former residents was filmed.

Today, less than a dozen structures remain. They have been replaced by the expansion of St. Luke’s Health Center, the retirement community Bishop Spencer Place, apartment buildings and parking lots. In June 2022, three more Steptoe buildings were demolished to make way for a surface parking lot and a few days later, another home was razed, creating new concern that the physical reminders of the area are being lost.

Steptoe Lives, which includes the Plaza Westport Neighborhood Association, Historic Kansas City, the Westport Presbyterian Church, the St. James Missionary Baptist Church, the Santa Fe Neighborhood Council and other individuals, is made up of people who lived in Steptoe, have ties to it, live in the neighborhood today, and others interested in keeping its memory alive.

Recognizing that there have been multiple attempts over the past several decades to document Steptoe history, Steptoe Lives says it wants to tie up the loose ends in documenting the neighborhood’s history and ensure there are tools to keep Steptoe’s story alive in the future.

Steptoe Lives has identified a number of short-term goals including: requesting that the city return W. 43rd Street Terrace to its original name, Steptoe; replacing markers that once pointed out the former location of the Penn School, the first school west of the Mississippi built for the express purpose of educating Black children; and creating physical historical markers to broaden awareness of Steptoe.

The Kansas City Historic Preservation Office has begun conducting a survey of Steptoe to see if it would qualify as a historic district.

One of the action steps identified by Steptoe Lives was to rename W. 43rd Terrace, from Jefferson Street, on the west, to Washington Street, on the east, to Steptoe Street which is the name that street bore when platted in 1857 as a part of Pate’s Addition, but Ordinance No. 3083, passed by the City Council on April 3,1933, took away that name as a part of a standardization of street names to numbered streets.

Ordinance No. 230029 authorizing the renaming of W. 43rd Terrace to Steptoe was introduced and was sponsored by Councilmembers Shields and Bunch. It was approved by the City Council on January 18

Renaming this portion of W. 43rd Terrace, from Jefferson to Washington, is not merely an “honorary” designation that can quickly vanish, but an actual renaming of the street, with those changes being made on official maps of the City. 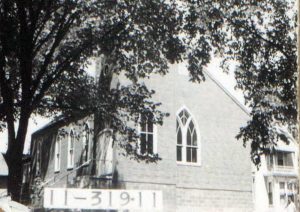 The group participated in its first event on Sept. 9, when the Westport Presbyterian Church dedicated a mural documenting the history of Steptoe and the Penn School. The mural is located at the rear of the church, 201 Westport Road, on the wall of the Willow Woods Child Development Center.

A 1940 photo of the St. James Missionary Baptist Church at 508 W. 43rd Street, shortly after it had moved to this new location. The church was founded by former slaves, many of whom lived in the historic Steptoe neighborhood near Westport. Courtesy Kansas City Public Library, Missouri Valley Special Collections.

A church founded by former slaves in Kansas City will celebrate its 152nd anniversary on Sunday, Oct. 16 with an old-fashioned tent meeting.  The St. James Missionary Baptist Church (St. James MBC), 508 W. 43rd Street, will celebrate its history from 1:30 to 2:30 p.m. including a historical reenactment, the story of the church over the decades, and a new effort to keep the memory of the surrounding Steptoe neighborhood alive

St. James MBC, which is on the Kansas City Register of Historic Places,  had its beginnings in cottage prayer meetings of former slaves beginning in the fall of 1870. The first formal church congregation met in temporary quarters at the corner of Archibald and what is now known as Mill Creek Blvd. Brush Creek served as the baptismal pool at that time.

The first church building was erected at Mill and High Streets (40th Terrace) in 1886. According to the historical register nomination, “This building served the African American community in Westport until 1938, when the neighboring Manor Bakery purchased the building to expand their bakery. The church members purchased property at 43rd and Washington and also bought the adjoining house at 4224 Washington and held services there until the new church was completed in 1939. “

In 1939, the congregation moved to its current location at 508 West 43rd St. The congregation has continually worshipped at this location since then, except when the sanctuary was under reconstruction. It is the second oldest African American Christian church in Kansas City and the current building has resiliently emerged from two arson fires, rebuilding each time.

Joining church members in the anniversary celebration will be members of the Steptoe Lives coalition, a group of individuals and associations concerned about Steptoe’s vanishing history. Steptoe Lives includes: the Plaza Westport Neighborhood Association, Historic Kansas City, the Westport Presbyterian Church, the Santa Fe Area Council, the St. James MBC Church and other individuals who lived in Steptoe, have ties to it, live in the neighborhood today, and are interested in keeping its memory alive. The Westport Presbyterian Church is serving as a partner in this celebration and has assisted by providing actors for the historical re-enactment. Rev. Scott Myers of Westport Presbyterian will also participate in the service.