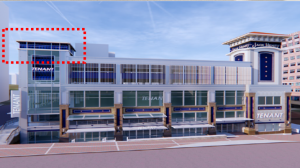 Drake’s plan called for the renovation of the existing Jack Henry building, including the addition of a small tower at the building’s SW corner that would exceed the height restriction by 9 feet.

Historic Kansas City met with Drake Development twice and testified at both the City Plan Commission and Neighborhood Planning and Development Committee of the City Council:

Various amendments were offered. 4th District Councilmember Shields advocated for an amendment to the Ordinance that would prohibit signage above the 65 feet maximum height restriction otherwise applicable under the Plaza Bowl Overlay District.  Ultimately Ordinance No. 200088, as amended, was adopted, with only Councilmember Barnes voting against the request for the height deviation.

Prior to the hearing, Historic Kansas City worked with Councilmember Shields. Although it did not take the form of an amendment, Councilmember Shields requested that the City Planning and Development Department within 30 days convene the Midtown Plaza Area Plan Implementation Group to consider the criteria for when exceptions to the maximum heights under the Plaza Bowl Overlap District should be granted.

Establishment of criteria as to when to grant such exceptions is an important future safeguard.

This amendment paves the way for the future demolition of the 7th Church of Christ.