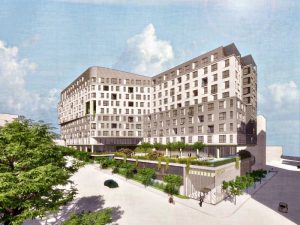 Another development is being proposed along Belleview (the southbound trafficway), north of W. 48th St. It lies to the west of Carlton Plaza and the Washington Irving Condominiums. The 4711 Belleview Mixed-Use Development project is a rezoning from District MPD/R1.5 to District MPD. 4711 Belleview is a mixed-use, new construction project on seven vacant parcels, and a parcel with structures near the former JJ’s restaurant explosion site. The proposed building includes four levels of parking below grade, and twelve stories above grade, a landscaped park-level amenity deck (414), streetscape improvements, street-facing commercial space along Belleview, and high-rise residential units (320).

The Midtown Plaza Area Plan (MPAP) “Bowl Concept” calls for 45-130’ (minimum 3 stories or maximum of 10 stories) at this location. The proposed building exceeds the Plaza Bowl Concept height, which allows for 130 feet, by about 29 feet. This property is outside of the Plaza Bowl Overlay District. The MPAP contemplated that the corridor between Madison and Belleview would be the rim of the Plaza Bowl and would have the most density.

In an initial June plan, the developer sought to complete a 338-apartment complex that would have surpassed the Midtown/Plaza Area Plan’s standards by up to 41 feet, with a 171-foot-tall building corner in an area the “Bowl Concept” calls for 45 ‘ – 130’. But following meetings with Historic Kansas City and neighbors, Lane4 reduced its unit count to 320 apartments, bringing down the building’s height at the south end to 29 feet above the area plan guidelines. Those adjustments brought the project into an acceptable height range, while also meeting other goals of the Midtown/Plaza Area Plan, such as encouragement of onsite parking and creation of new public space.

On August 2nd, the City Plan Commission recommended approval of the project’s preliminary plan and a partial site rezoning request. The City Plan Commission approved the 48th Street project subject to conditions outlined in the city staff report and those added by staff. Staff provided a brief presentation that included a single slide stating that the applicant would be making changes to the plan at the request of HKC.   The applicant’s presentation was brief and stated that Lane4 agreed to the conditions listed in HKC’s letter.

In preparation for review by the City Council, Councilmember Shields and Historic Kansas City are continuing to work with the developer to increase step-backs at the 11th Floor, away from the southern plane of the building, and to eliminate some units on the south end to decrease the deviation from the MPAP height recommendations. One of those conditions is that the developer waive the right to further increase heights between this preliminary development plan and the final development plan. Final development plans are approved administratively through City staff and the City Plan Commission and don’t come back for approval by the full City Council. That process allows incremental height creep.

The project will be heard by the Planning, Zoning, & Economic Development Committee of the City Council on August 17th at 1:30 pm.