The Rector Mansion has been on HKC’s “Most Endangered List” in an effort to bring awareness to the plight of this important site. Sarah Rector’s story is a relatively untold story of American success and a woman’s prosperity. During segregation, her complex legacy reached beyond racial boundaries.
Learn more about Sarah here.

As a part of our field service outreach, HKC has established a relationship with the new building owner, United Inner City Services’ (UICS) and has supported their efforts to seek funding and explore restoration of the Sarah Rector Mansion. A grant from the National Trust for Historic Preservation has laid the groundwork for this ongoing effort. 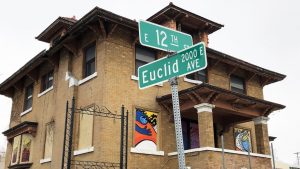