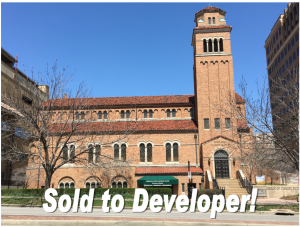 In 2019, Historic Kansas City aggressively advocated against the demolition of the church, at 604 W 47th St., and infill development proposal by RED Development. The proposal was withdrawn following HKC’s success in advocating for the adoption of the Plaza Bowl Overlay District. The Overlay should limit a new building, at this location, to no more than 45 feet.

The church was purchased in 2020 by JH Investors, associated with the developer of the Jack Henry Building. The acquisition of the church is a developer’s move closer to the demolition of a
cherished and respected Plaza landmark. A copy of the recorded deed along with the separately recorded memorandum suggests some type of lease back to the church. The deed was recorded Monday, February 10. That transfer occurred before the NPD City Council Committee hearing on February 12 that considered the height deviation request with respect to the Jack Henry Building.

The developer’s intent is to demolish the church and replace it with a box that may or may not conform to the Overlay District. HKC and supporters of the Plaza are advocating for the City to adopt deviation criteria as stated above.

The Plaza Bowl Overlay Ordinance should prevent a new building over 45’ tall from being built on this site unless the deviation standard was grossly applied to allow additional, significant height. This is all the more reason for HKC and other supports of the Plaza to proceed expeditiously with the deviation standards.

Reach out to your 4th District Council Persons Today

The existing 1942 Romanesque Revival style church uniquely fits with the Plaza architecture and has no protection from demolition. This historic structure reflects and is a part of the core of Spanish architecture for which the Plaza is nationally known. That architecture is a major draw for businesses, visitors, as well as our community residents who seek a unique and pedestrian scale environment.

The goal of the recently adopted Overlay District is to preserve the character and integrity of the Plaza, maintain the Plaza Bowl concept, and protect the property values and expectations of Plaza property owners, residents and visitors.

What is allowed to happen at 47th and Pennsylvania could happen anywhere on the Plaza. That is why it is important that you share your concerns with your 4th District Councilmembers.