The City Plan Commission will be considering the COCINA47 DEVELOPMENT PLAN, for the northwest corner of 47th St. and Pennsylvania on TUESDAY, JUNE 7TH AT 9 AM VIA ZOOM.

Send a letter or email of opposition by no later than NOON on Monday, June 6th to publicengagement@kcmo.org. 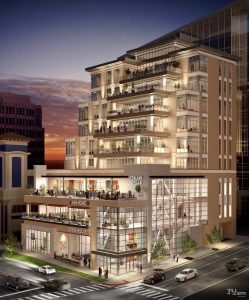 SEE THE EXAMPLE TEMPLATE BELOW

The [NAME OF GROUP] is writing to strongly urge you to OPPOSE the proposed plans for Cocina47 on the Country Club Plaza.

• The developer’s proposed plan directly violates the Midtown Plaza Area Plan and Plaza Bowl overlay ordinance. Both were designed to preserve the character and integrity of the Plaza. A lot of public engagement, over several years, went into these decisions to codify these height restrictions that impact a number of Plaza stakeholders.

• Allowing one developer to exceed the height limits set by the Plaza Bowl Overlay opens up the floodgates for other developers to ignore other overlay district ordinances and area plans created by neighborhoods and other stakeholders. Require the development plan to comply with the height regulations of the Plaza Overlay District. It’s as simple as “Follow the Rules.” It’s an ordinance, not a guide. Enforce it.

• We are also concerned that the developer’s parking plan poaches parking spaces that have been paid for and maintained by Plaza businesses, and/or it forces its patrons to seek on-street parking in the nearby neighborhoods.

• Please refuse to approve a development plan for the Church Site without written assurance that the parking requirements of both the Jack Henry Building redevelopment and the Church Site development are met without causing encroachment into the surrounding residential neighborhood or the poaching of existing Plaza parking to the detriment of Plaza tenants and businesses.

The Plaza is an iconic and irreplaceable district in Kansas City. Years ago citizens, businesspersons, and city officials hammered out a plan to preserve and protect the unique character and quality of the Plaza; that agreement is embodied in the Midtown Plaza Area Plan, and the Plaza Bowl Overlay District. Upholding that agreement will help preserve the character of our community.

Threat to the Historic Church

Since 2017, HKC has sought to protect the 7th Church of Christ Scientist from demolition. RED Development withdrew its development proposal following HKC’s success in advocating for the adoption of the Plaza Bowl Overlay District.

HKC also filed an application to locally designate the structure. The local register offers demolition protection, of a sort, but we were promptly sued by the Church congregation. HKC settled the issue and withdrew the application for designation. As the property owner, the Church objected to the application. In Kansas City, you just can’t get something locally designated over owner objection. It’s not a requirement, but a political reality. The only exception is the City Council approved the designation of Union Station over the owner’s objection.

JH Investors purchased the church in 2020.

What originally was a three-story restaurant proposal has taken a surprise twist with the developer now pursuing a NINE-STORY project there. Drake Development has submitted plans to the city for a “Cocina47” development that would build six floors of luxury condominiums above three levels of restaurant space. The developer plans to demolish the Seventh Church of Christ, Scientist, a 1942-era structure, to make way for the new structure. Because of its height, the project would need a variance from City Hall to get around the Plaza Overlay District zoning standards the city has implemented on buildings in and around the Plaza. Parking remains an issue. 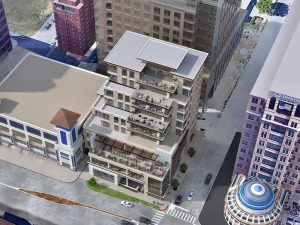 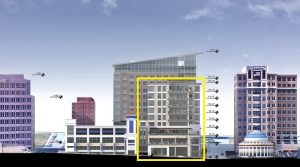 Your attendance at this meeting is important! Bring 10 friends.

Save these two additional dates and participate in shaping the future of the Plaza:
• Tuesday, June 7, at 9:00 a.m. via ZOOM hearing before the City Plan Commission on this redevelopment proposal.
• Wednesday, June 22, at 1:30 p.m. also on the 26th Floor of City Hall, hearing on the ordinance authorizing the redevelopment before the City Council Committee on Neighborhood Planning and Development.

What is fundamentally at issue here is rules-based, citizen-informed development . . . in this case, the mandatory maximum heights allowed, not recommended, under the Plaza Bowl Overlay District Ordinance unanimously passed by the Mayor and City Council in 2019.

Mayors, city managers and city councils come and go but all of us in the community who make investments — and that includes our homes — need reliable rules on which to base reasonable and enduring decisions.  The issue is far larger than the Plaza and the risk is that politics — not carefully considered and durable policies — will govern throughout our community.

With the Plaza Plan and other area plans; the FOCUS plan; zoning overlays and the like, we have tried to elevate durable rules and policy over fad, fashion and the politics of the moment.  That is the fundamental issue.

It is not a proposition of freezing the development of the city — far from it, as experience shows.  It has to do with enabling synergistic and compatible development, harmonizing neighborhoods and other built amenities and spaces into a community worthy of the special claims we all like to make for Kansas City.

How could something like the Plaza ever have “happened” without guiding insights, practice and pattern that transcend this or next year’s elections?  Without a Plaza Plan as developed over 30 years ago and re-confirmed unanimously by City Council only six years ago?

This season’s follies are no substitute for stable, citizen-based AND CITY-ENFORCED planning.  That’s what creates and sustains desirable venues for development, which is why we have controversy on the Plaza now.  Someone wants the benefit of 100 years of careful and sound development but is unwilling to conform to what makes the Plaza great.

It’s as simple as “Follow the Rules.” It’s an ordinance, not a guide. Enforce it.

What You Can Do

Contact the Mayor, your City Council representatives and those on the Neighborhood Planning and Development Committee. Send an email or letter stating your organizations’ opposition to the Cocina47 project and its implications for neighborhoods and area planning in Kansas City.

The anticipated development proposal by JH Investors is real!

The Plaza’s historic nature is immediately threatened by the demolition of the 7th Church of Christ Scientist at the corner of 47th and Pennsylvania to be replaced with a 3 – 4 – story project.

The goal of the Plaza Overlay District is to preserve the character and integrity of the Plaza, maintain the Plaza Bowl concept, and protect the property values and expectations of Plaza property owners, residents and visitors. The Overlay restricts heights and land uses at this location to 45 feet. The Overlay does NOT protect the church from demolition.

The developer bought it fully knowledgeable of the Plaza Bowl Overlay District Ordinance. HKC estimates they exceed the height by 18 or more feet. This would require a deviation authorized by the City Council, for which there are no standards for evaluation.

Below, see HKCs letter to the Director of City Planning and Development, the Mayor, the City Council, and the City Manager.

Key Message: Allowing one developer to exceed the height limits set by the Plaza Bowl Overlay opens up the floodgates for other developers to ignore other overlay district ordinances and area plans created by neighborhoods and other stakeholders.

The following is taken from HKCs letter to the Director of City Planning and Development, the Mayor, the City Council, and the City Manager.

HKC has met with the developer and his architect and attorney and reviewed the most recent plans. We have indicated that height is excessive and that we would want to see floor dimensions; an 8 foot parapet; and a tower on the southeast corner modified to meet Plaza Plan and zoning requirements.

What we see presented most recently, though as yet unfiled with the City, is a structure that would rival the height and massing of the former Jack Henry building next door plus a tower on the southeast corner. Oddly, what is supposed to be a 45 foot zone property would host a structure that rises as high as Jack Henry — which sits in a 65 foot zone – and has a substantially higher grade elevation than the site of the Cocina47 project. Eight feet of the proposed height is an empty parapet. The tower has no purpose other than an aesthetic gesture (perhaps?). There is no parking provision on-site and suggestions that parking is arranged with neighboring owners we are told and believe are questionable. Those neighbors, of course, have invested mightily in parking, a hallmark of the Plaza historically and functionally, required by existing City regulation and utterly essential to the commercial well-being and vitality of the Plaza.

What we’re seeing proposed is flatly incompatible with the Midtown Plaza Area Plan and the Plaza Bowl Overlay. The departures are not minor and cannot be accommodated with minor tweaks to the Plan and zoning. There is clearly a risk of Pandora effect and no end of wrangle on the part of all involved if thoughtful standards carefully put in place are not followed. The serious violations of the Plaza Bowl Overlay District Ordinance are summarized on the Table and Comments section. (see HKC Fact Sheet)

Clearly a compliant design should be at least 20 feet less than we’re seeing. Unlike the existing Jack Henry building incorporated in that project, this is a NEW building which can readily comply. The site was acquired by the current owner with full notice of the City’s requirements. Is there any point of the grade of the church site that is higher than the Jack Henry site? NO. When you look at the 47th street elevation, you should see a 20 ft difference in height, between Jack Henry and the proposed project, if not more — in fact, the grade is rising to the west. It’s that simple.

We have heard that the church group that sold the property to the current owner has retained a right to occupancy requiring space with a 22 foot vertical dimension. While, again, that shouldn’t negate City requirements, it has been cited for a need for more height for the building generally. However, we have information that the church does not need more than 16 feet for their space. We are told the church’s’ priority is to get this project underway.

What we are provided and told is submitted to the City Planning & Development Department is not in compliance with adopted city policy. We are also very willing to have further discussion with the developer in search of solutions that will both preserve the Plaza Bowl and integrity of Plaza planning while also optimize commercial and experiential enhancements on this site — notwithstanding potential loss of the historic church building which itself is greatly against the grain of Plaza planning.

Area stakeholders have invested millions of dollars based upon approved zoning and adopted plans. To vary height upward by 20 feet is a big deal and a rather breathtaking ask, to say the least.

HKC has worked extensively with City Councilwoman Shields on this effort. We have met with the developer and key stakeholders several times and expressed the importance of following adopted ordinances, enforcing adopted area plans, and saving the building. HKC has also written a letter to the city urging planners to follow the existing planning documents and the Plaza Bowl Overlay. HKC has continued to work with area property owners so to leverage their personal interest in this matter, secure letters of opposition, and their participation in city council briefings. HKC has met with 16 neighborhood organizations and also prepared an aggressive outreach campaign to be launched on social media and other media channels upon project submission. HKC is now moving to the “informational phase” where we will meet with City Council members.

We need your help! Join HKC and FOP in the fight to Save the Plaza.